As I wrote in my tumblr my husband is a keen fly-fisherman.  He finds it very therapeutic; you have no choice but to switch off to everything else and concentrate.  During the season he fishes for trout and salmon and if we’re lucky brings fish home for me to cook and the family to eat.  It’s not always me who’s left to do the cooking though; he will often prepare a small trout for breakfast by zapping it in the microwave with a slice of lemon, some seasoning and a little butter.  This wouldn’t be my menu choice first thing in the morning but the male members of this household are happy to eat it.

When we had our new kitchen installed in 2006 (not so new anymore then) and my brand new Aga was in place, our friend Drew, maker of beautiful kitchens and sometime fisherman himself, asked me how I was planning to adorn the shelf above the Aga.  Since I had as yet no plans for the shelf he took it upon himself to bring along an item from his shop: a trout in a glass case.  At first I said that no, absolutely not, I was not the sort of person who displayed dead animals in her kitchen, but he explained that this was not a real trout and, with my husband looking on in amusement, placed the case on the shelf.  I had to admit that it was rather fine but continued to maintain (especially now that I’d seen the price tag!) that I didn’t want it.

Fast forward a few days to a sunny spring evening by the River Usk.  My husband had spent a few hours making the most of the early evening rise and the boys and I joined him and others, including Drew and his family, for a barbecue.  The conversation turned to my kitchen, which was becoming quite well known now that Drew and I had been telling people about it and he’d put some photos of it on his website.  He told the assembled friends that the only thing missing in it was a large trout in a glass case.  By now we’d all had a few drinks and I saw an opportunity.  I handed the mellow Drew another beer while telling him he should give me the trout for free after all the publicity I’d given him for his kitchen business, and, would you believe, he agreed.

Anyone visiting who admires the trout above the Aga is told that it’s the result of one of my, not my husband’s, “fishing” trips. 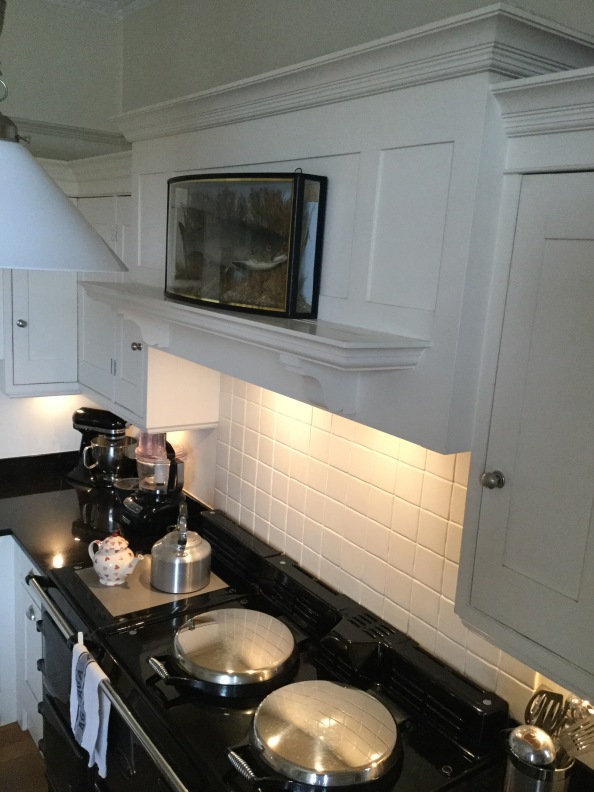