If you’ve been reading this blog for a while you’ll know how fond I am of baking with raspberries. I’ve made this raspberry yoghurt cake twice now, once with regular flour and once with spelt and can honestly say there was no noticeable difference. The recipe is by Diana Henry – no surprises there! – and is from her book Simple. I love that the recipe was inspired by a cake she ate at a café in Nettlebed, a village in Oxfordshire, which holds many happy memories for me.

On the day Theresa May resigned I announced on Twitter that I was about to make this cake as a break from all the political drama, and there was quite a bit of interest, which is why I’m writing up the recipe for you today. The yoghurt doesn’t give the cake a yoghurt-y taste, if you know what I mean, but I think it gives it a lightness and makes it deliciously moist. It’s a perfect summer cake, but if you keep raspberries in your freezer, there’s nothing to stop you making it at other times of the year.

The first lemon and ricotta cake I made was not a success. It was a Jamie Oliver recipe and didn’t really work, producing a rather dense cake. It may of course be entirely my fault and I might try it again one day. On the other hand, I’m not sure why I’d bother because yesterday I made a Diana Henry version from her book Simple and it was light and moist and delicious.

This cake works as an afternoon tea cake but also as a dessert served perhaps with some berries and crème fraîche or whipped cream. It’s best eaten slightly warm. It’s the ricotta that makes the cake moist but it also means it doesn’t keep that well. Don’t do what I did and make it on a day when hardly anyone’s around to share it with you because it really is best eaten on the day it’s made. If you do have some left, wrap it in clingfilm and refrigerate it. This is what I did and the next day I gave it a blast (a minute or two at high heat) in the microwave to warm it up a little and it freshened up beautifully. I was thrilled when our Italian friend, who is very particular about the food of his homeland and whose late wife was the most wonderful cook, gave it his approval.

You will need a 20cm springform tin, lightly greased and base-lined (with bake-o-glide)

It is said that marzipan is a bit like Marmite in that you either love it or hate it. I absolutely adore it and hence this cake, which comprises a thick layer of the stuff in the middle. This is the reason for the “sticky” in the title. Cakes made with ground almonds tend to be deliciously moist anyway, but the addition of marzipan takes it to a whole new level. I made this cake for my book club last week and received compliments and requests for the recipe. Even my husband, who normally doesn’t like marzipan, loved it.

This cake can also be seen as relief from the relentless EU referendum debate. At last the day has finally arrived and all we can do is cast our votes and wait for the result. In a conversation with a Twitter mate, the other day, we bemoaned how nasty conversations had become, with people who normally share similar political outlooks finding themselves on opposite sides. She and I decided we’d change the subject and discuss recipes instead, and that is how I’ve come to be writing about this cake. So, @soyoprincess, this is for you. 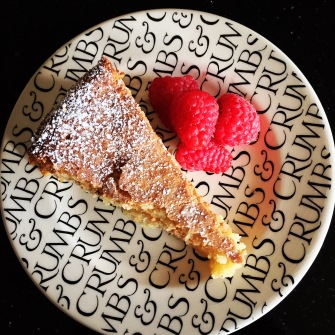 For some reason I haven’t done any baking for a while. It might be because there have only been three of us to feed most of the time but that’s not usually sufficient reason. If I don’t want a cake to go stale before we’ve finished it, I bake a small one or perhaps some cookies, scones, muffins or individual cakes like these rock cakes, so I can put some in the freezer.

My son and his fiancée have just moved into their first flat together. They don’t own it of course – what young couple can afford a mortgage nowadays? – but they’re very happy and excited and it’s made me very happy on their behalf. It’s also reminded me of what it was like when my husband and I started out. They have very little so I’ve gone through some of my cupboards, digging out glasses, crockery and other items we no longer use and my husband found them a very nice pine table in our garage. They only have one bedroom so they sensibly bought a sofa bed for the living room. This has still not been delivered (a frustrating tale which my Twitter followers might be aware of) but it will arrive next week and their little home will be more or less complete.

Anyway, I digress. Perhaps it was all the vicarious home-making activity that led me to bake a cake today. I opted for a recipe for an orange and poppy seed cake recipe from the Nordic Bakery Cookbook. I don’t think I’d ever made a cake with poppy seeds before but at a café in Bristol recently, youngest son raved about the lemon and poppy seed cake so I thought he might be pleased to find something similar waiting for him on his return from school this afternoon. I was right. We both love the cake and have decided that simple Nordic cakes like this are our favourites: no icing or decoration of any kind; just wholesome and declicious.

Here’s the recipe, which I tweaked a little. I don’t like an overpowering vanilla flavour (a legacy from being forced to eat lumpy custard at school in the cruel 1960s) so I used 2 teaspoons here instead of 3. I also used the all-in-one method to mix the batter. I find it works for most cakes, and is much quicker, obviously.

You will need a 20cm/8inch round cake tin, greased

Now I’m as sceptical as the next person about the so-called food intolerances and allergies of the modern world, but there’s no doubt about it, many people report feeling unwell or at best uncomfortable if they eat foods containing wheat, and prefer to steer clear of them. A friend staying recently is one such person. She isn’t coeliac so gluten’s fine, but she has discovered over the years that she’s less likely to have stomach aches and feel generally unwell if she doesn’t eat bread, pasta and cakes. Unless, that is, they are made using spelt flour. Spelt is an ancient grain with a unique gluten structure which makes it easier to digest; at least, that’s what it says on my packet. I made the orange and poppy seed cake when she came, but this time substituted spelt flour for plain flour. And, guess what, it turned out the same! Okay, so maybe it was just a tiny bit denser, but it’s possible that, being so determined to find something different about it, I completely imagined this.

When I substituted lemon for orange in the cake I was very pleased with the result. It was a good way to use up some of the lemons left over from making my son’s birthday cake. I added the juice of two lemons and the zest of one, which produced a subtle lemon flavour. If you wanted a stronger flavour, you could add the zest of a further lemon. 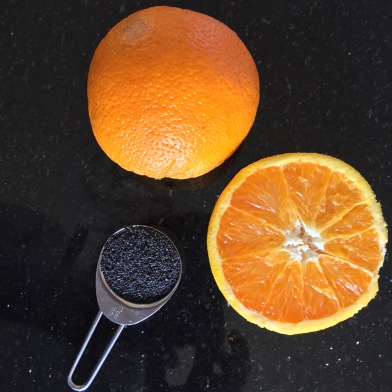 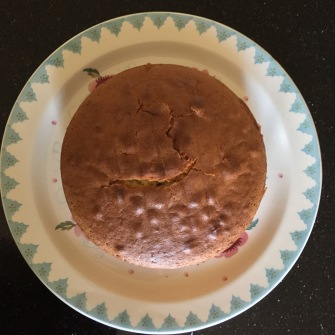 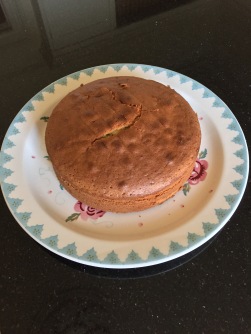 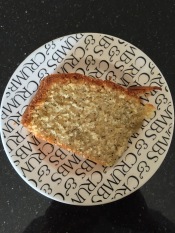 I don’t see myself as much of a maker of puddings or desserts; I’m nervous about pastry and anyway, during the week there simply isn’t time to make a dessert.  In all honesty I’d rather bake a cake to have with a cup of tea in the afternoon and then just eat some chocolate to satisfy my sweet tooth at the end of a meal.  But, as I wrote here, I’m not eating chocolate anymore.

On Sundays, as I think I’ve mentioned before, my mother-in-law usually makes a pudding for us all.  I’ll make one if we have friends round or to take to friends if we’re invited to lunch or supper.  I’ll also make a dessert when it’s my turn to host book club or film club.

The raspberry and cinnamon torte I wrote about in my tumblr days is one of our favourites:

This bakewell cake by Fay Ripley, which my Twitter friend @lesleyj28 alerted me to recently, could serve as a dessert or a teatime cake.  I pounced on the recipe because it contains everything that’s delicious and good about a bakewell tart (almonds, raspberry jam!) but no pastry.  I love pastry but (see above) don’t love making it.  Without the need to make pastry, this cake is mixed and baked in no time.  I used to watch Fay Ripley in Cold Feet on the telly (LOVED it) and had heard about her recipes but had not tried them before.  As I began to make this, I realised how similar it is to my torte.  It is a little more “cake-y” (two eggs instead of one), has jam in it and doesn’t contain cinnamon but apart from that it’s the same.  In fact, if I made it again, I’d probably replace the vanilla extract with cinnamon, but that’s just my personal preference.  Also – a small point – I didn’t have any flaked almonds in the cupboard so scattered over chopped almonds instead: a poor compromise on Fay’s recipe, we later all agreed.

I love making raspberry muffins too, although I see them as more of a coffee or teatime thing than a dessert.  I also wrote about these on my tumblr: