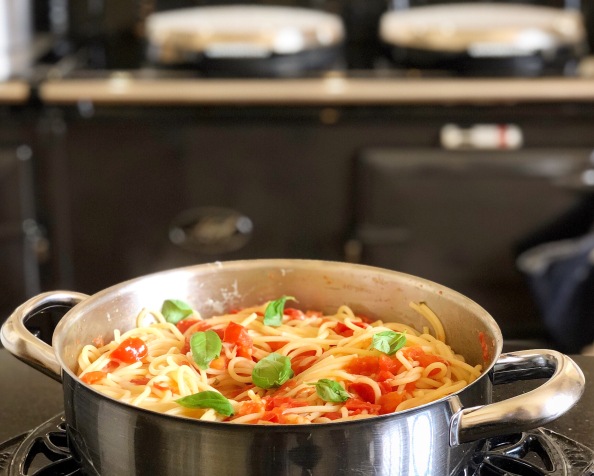 The combination of pasta and tomato sauce is one of my favourite things, and I make it a lot. I probably make Felicity Cloake’s “perfect” sauce the most but not every time. Another favourite is the one I told you about here.

Whenever we eat this I’m transported back to when my boys were young. I would make it for them at least once a week; clean plates were guaranteed. Of course one could easily pick up a tub of sauce from the supermarket, and sometimes on busy days I would do this, but in truth it doesn’t take long to prepare your own. I’d like to think that’s what Italians would do. In fact I happened to be chatting on the phone to an Italian friend when making tomato sauce yesterday, and he gave me a few tips. You see I had bought some fresh San Marzano plum tomatoes in my local Waitrose 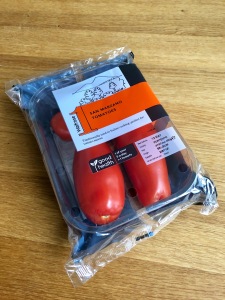 and wanted to make my sauce with these instead of the usual tinned tomatoes. I’m sure in Italy this sauce is made with fresh tomatoes a lot of the time, but until relatively recently we couldn’t even buy fresh plum tomatoes here so we all use tinned. I knew the San Marzano was considered to be a superior tomato and a quick Google search revealed that it’s also sweeter and less acidic than other plum tomatoes. I normally add a little sugar when cooking tomatoes but didn’t in this case: they were sweet enough.

My friend Antonio said there was no need even to cook them: I could just chop them up, add a little olive oil, basil and seasoning, and add them to hot pasta. I will do that next time but I had already chopped an onion which was softening in some olive oil in the simmering oven. His next tip was to slightly undercook the spaghetti, drain it and then finishing cooking it in the sauce. He also said to add some grated parmesan at the same time as adding the pasta. I will describe everything I did below.

Rocket dressed with extra virgin olive oil, balsamic vinegar, salt and pepper is the perfect accompaniment, as is this bottle of Valpolicella. 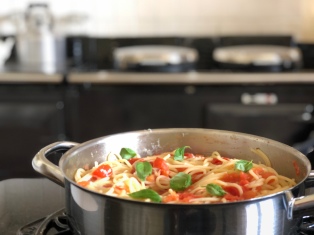 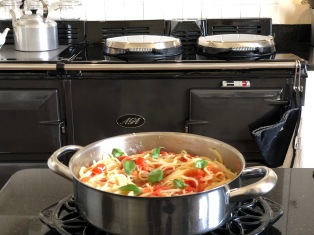 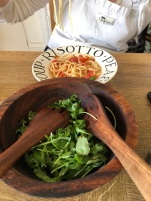 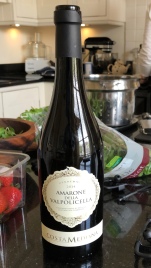 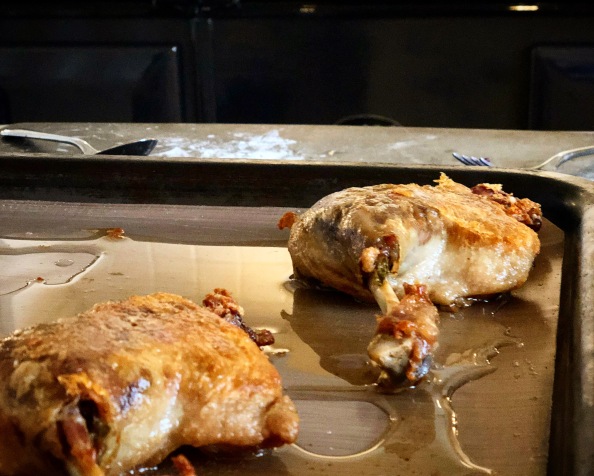 As I mentioned in my last post, during January we are going to avoid meat during the week while continuing to enjoy it on Sundays. I had bought duck legs in the run-up to Christmas, thinking I would make duck confit. However, all the other Christmas preparation got in the way and I didn’t get round to it so I put them in my freezer.

Confit is usually the leg of a bird that is naturally fatty such as goose, duck, or even pork (pigs do fly in this house), that has been salted, seasoned, cooked and finally preserved in its own fat.

I read recently that you don’t have to make duck confit weeks in advance: it will taste delicious if made the day before you plan to eat it. With this in mind I defrosted six duck legs on Friday, salted them overnight, prepared them on Saturday and we ate four of them for Sunday lunch yesterday. The remaining two will reside in my fridge for a few weeks.

This wasn’t the first time I’d made confit but it had been a while so I read two or three recipes before starting. This is what I did:

I  served our duck confit with the plum sauce, boulangère potatoes, red cabbage and broccoli. It was complemented by a superb glass from a bottle of the Italian wine Settebraccia. It comes from the Salento region of Italy and had been given as a gift to my husband. In future I will be more organised and prepare my confit a few weeks before Christmas so that I know I have at least one meal sorted for this busy season. 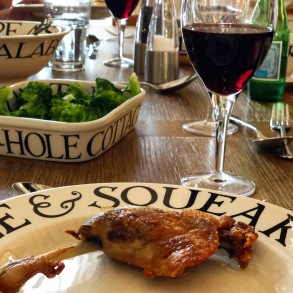 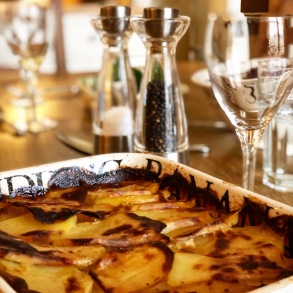 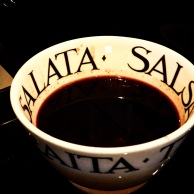 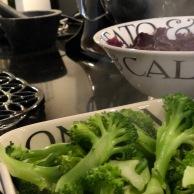 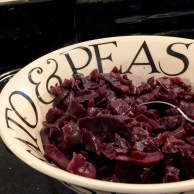 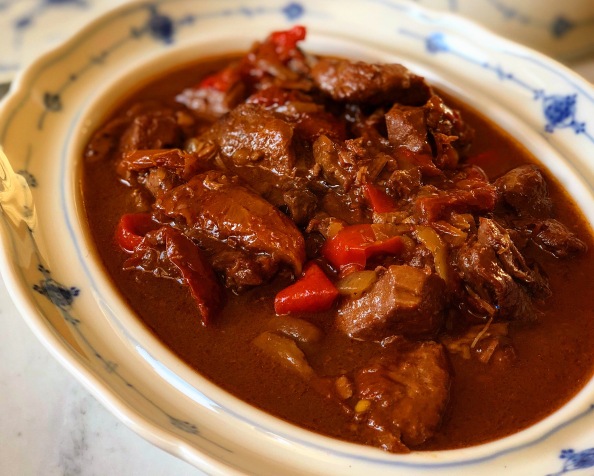 Before she became a TV celebrity Mary Berry was known as an Aga cook who ran courses on how to get the most out of your Aga as well as for writing The Aga Book which I believe is still given to every new Aga owner when their new oven is installed. My mother-in-law, who has owned a few Agas in her time, learned how to make this stew on one of Mary Berry’s courses and wrote it out for me many years ago because she thought it was so simple yet so delicious. I never got round to making it then but when I found a jar of sun-dried tomatoes which needed using up in my fridge recently, the recipe sprang to mind and I dug it out.

You can make this the day before, refrigerate it overnight and reheat it gently in the simmering oven the next day. I have never worked out why but casseroles are often better when made a day ahead.

The quantities of wine and stock given here are approximate because, as we Aga cooks know, you tend to need less liquid in an Aga. I start with the wine and stop pouring when the meat is almost but not completely covered. You can always add stock later on if you think it needs it.

This is delicious with mashed potato but I think I prefer it with rice. Serve with a green vegetable too. 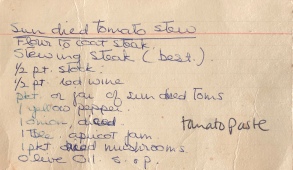 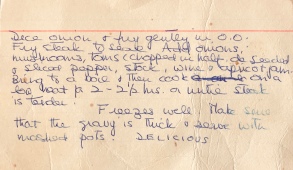 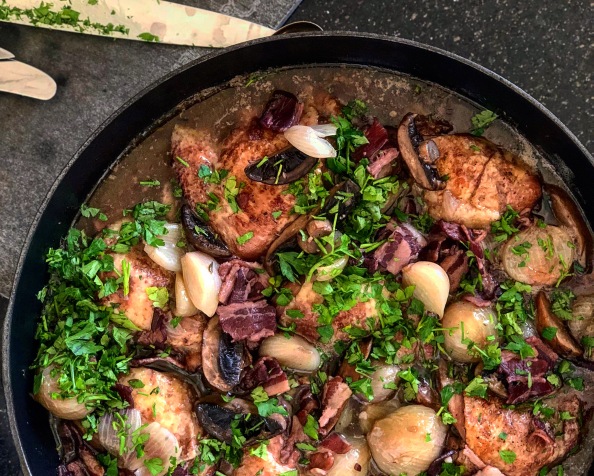 Following on from my boeuf bourgignon post, here’s another classic recipe. Coq au Vin is in fact just boeuf bourgignon but with chicken. Discuss. Seriously, sometimes I wonder why we keep looking for new ideas when the classic, tried and tested recipes are so good; I mean, there’s a reason they’ve been around for so long. It has not escaped my notice, by the way, that the two I mention here are French.

If you Google “Coq au Vin” you will find many different ways of making it but the ingredients don’t vary much. I based mine on Delia’s recipe. Good old Delia: she provides clear instructions and retains all the essential elements without sacrificing flavour. And because we are Aga cooks, we can be relaxed about the cooking time and leave our dish bubbling gently in the simmering oven for longer than the 40 minutes – 1 hour most recipes recommend. Chatting about this in my “I love my Aga” Facebook group, there was discussion about how to thicken the sauce. You could dust the chicken pieces with flour first, but I rather like the method I give here which is to whisk in a butter and flour paste at the end.

I don’t know if anyone uses the cock bird to make this dish anymore. In fact, I don’t know if it would be possible to get hold of one. A chicken, jointed into 8 pieces has become traditional here and I confess that when I made this recently, I just used good quality chicken thighs I bought from Waitrose. 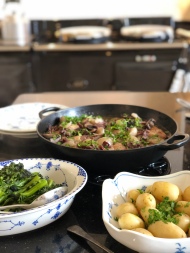 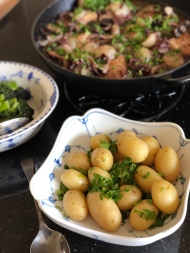 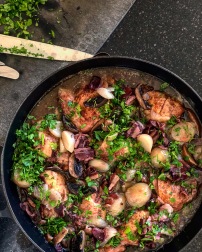 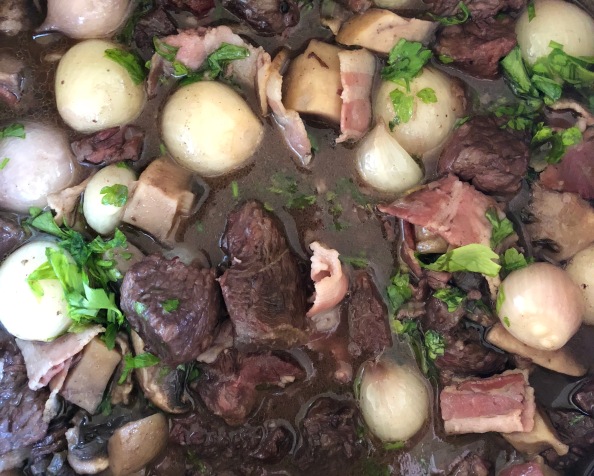 Inspired by the success of the lamb ragù in my last post, I decided to try out the “not browning the meat” method once again and made an old favourite: boeuf bourguignon. It was a success, so I thought I’d give you the recipe I used for this classic dish. I adapted it from Delia’s in her Complete Cookery Course. It’s also available online here. I’m probably breaking the rules here but if you don’t have any Burgundy, it would not be a disaster if you use whatever red wine you do happen to have in your kitchen.

Boulangère or dauphinoise potatoes go well with this and so does rice. A green salad and/or green beans are also good accompaniments. As with most casseroles, this one is better on the second day so it’s worth making the day before you want to eat it. I’d maybe not add the mushrooms until reheating it on the second day 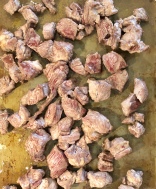