On Sunday we went out to lunch to celebrate my mother-in-law’s 91st birthday.  It was such a treat to go out instead of cooking the usual roast, it almost felt like it was my birthday too!  A happy time was had by all, even though Granny didn’t, for various reasons, have any of her eight grandsons there.  But she had her three children (my husband and his two sisters) and the spouses of two of them.  We all remarked that we didn’t think we’d had a meal together sans offspring since before they were born.

Lunch was at one of our favourite Bristol restaurants, Bosco Pizzeria.  The pizzas there are cooked in a wood fire oven – the best way, no question – and give Neapolitan and Florentine pizzas a run for their money. 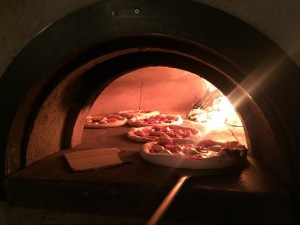 I am a home cook who doesn’t try to emulate restaurant cooking.  At restaurants I tend to choose dishes I probably wouldn’t attempt to make at home.  I doubt any domestic kitchens could reproduce pizzas like the wood-fired ones, but that doesn’t mean it’s not worth having a go and, unlike the ultra-salty supermarket version, a homemade pizza makes for a reasonably nutritious meal.  I mean, what is unhealthy about bread, tomatoes and mozzarella?  When the boys were young I used to follow a Jamie Oliver recipe for the dough which makes about 8 pizzas, just enough to feed them and any friends who came home from school with them.

After much trial and error in the Aga, we’ve come to the conclusion that the best way to cook pizza and achieve a crisp base, is by cooking it on the floor of the roasting oven (for about 8-10 minutes). 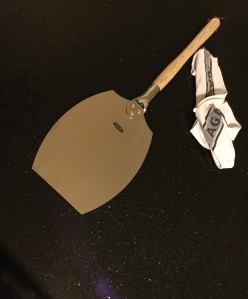 We’ve had a couple of “pizza nights” when youngest son made the dough (he loves kneading!), I made the tomato sauce (by simmering “chair de tomate” with some crushed garlic, a little sugar and seasoning) and we each chose our favourite toppings.  When third son G was present on one occasion, his role was that of tough-but-fair critic.  My husband’s job was to get the pizza in and out of the oven without damaging it and he’s become very adept at it.  He loves flourishing the baker’s paddle I bought from the Aga Cookshop and I told him not to worry, I wouldn’t mention the one that landed face down on the floor.