Yesterday I made the lightest and most delicious scones I’ve ever eaten. They are “Lily’s Scones” from Nigella Lawson’s “How to be a Domestic Goddess” book and I can’t think why I hadn’t tried them until now. You probably all already know about them but here’s the recipe, just in case. Oh, and I served them with Diana Henry’s “nearly” strawberry jam which I made the other day; it’s a quick way of making jam and perfect for this time of year when strawberries are in abundance. It’s a fairly runny jam (just like my Norwegian grandmother used to make, actually) and deliciously fresh-tasting.

Diana Henry says you could make a larger batch and freeze some.

(You will need your large Aga baking tray, lined with bake-o-glide and a 6 1/2 cm crinkle-edged cutter)

Serve with jam and Rodda’s clotted cream: the jam goes on first and the cream on top, as my Cornish daughter-in-law insists. 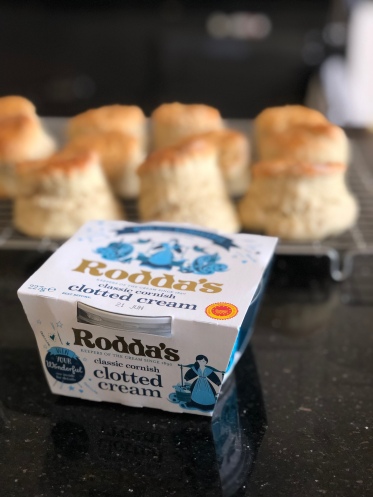