I’m calling these “Scandinavian” because I consulted my Norwegian grandmother’s recipe for the meatballs themselves and stole elements of a Diana Henry recipe for Swedish meatballs (in her book “Roast Figs Sugar Snow”) to make the sauce.

Surprisingly, even though my mother gave me her mother’s meatball recipe years ago, I had never used it before. I make meatballs a lot, but usually Italian-style ones in a tomato sauce to serve with spaghetti. It’s good to have a change and these, dare I say it, are just as good or possibly better. If Italian flavours are what you’re after it’s simpler just to make a ragù.

The addition of baking powder to my grandmother’s meatballs is a revelation: it makes them wonderfully light and airy. You can serve these with lingonberry sauce or jam. My son bought me some at SkandiKitchen in London. Ikea sells it too, but if you haven’t got any, cranberry sauce would also go well. I served them with braised, spiced red cabbage and plain boiled potatoes, which struck me as being very Norwegian. I’d like to think my grandmother would approve and that she’d be pleased I served them on her Porsgrund china plates. 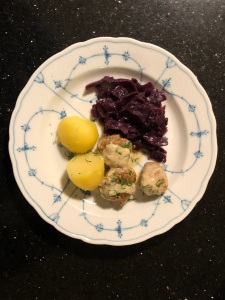 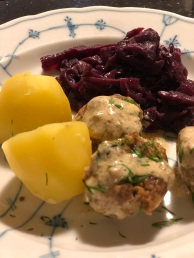 I make meatballs fairly regularly: Italian ones with garlic and herbs in tomato sauce, Thai ones with ginger, chilli and lime in a broth and Scandinavian ones with nutmeg and white pepper in a sour cream sauce. These are just the basics; there are so many variations, I feel I could spend my life making delicious meatballs without serving the same ones twice. And I haven’t even mentioned the accompaniments: pasta, noodles, potatoes or bread? I feel a whole series of blog posts coming on.

When a recipe I spotted recently promised to give me Italian-style meatballs like they make in New York, I couldn’t wait to try them. The meatballs proposed by chef Stephen Harris in the Telegraph are, as he says, quick to make and to cook. While they are not the best I’ve made, they’re pretty good and do conjure up that New York/Italian vibe.

If I was making these again, I’d add breadcrumbs soaked for half an hour in milk to the meat mixture. I find this makes the meatball texture softer and less rubbery. But that’s for another day. In the meantime, these will do fine.