I’ve been enjoying January so far. After the pressures of December, taking life at a slower pace is fine by me. I don’t mind the weather either, as long as my house is warm, and when I’m outdoors, being half-Norwegian I know that there’s no such thing as bad weather, only unsuitable clothing. I relish the changes of seasons that we have in this country. Last weekend we went to stay with friends in the Scottish Borders. We were only away three days but it felt longer and was a lovely break. It was grey and cold but we had packed waterproofs and lots of layers and strode out across the beautiful countryside. 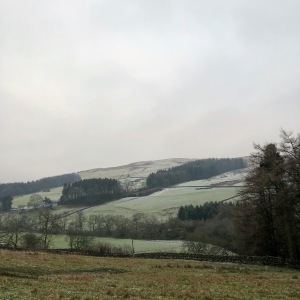 Without having to sacrifice my desire for comfort food during this long, cold month I have more or less stuck to my plan not to cook meat during the week. There was a blip last Monday when I made a chicken pie because I wanted to use up the remains of the roast chicken we’d had the day before. First I made stock with the carcass, and then made the pie filling using some mushrooms, bacon and thyme and of course the chicken and stock. I took Nigella’s advice and added a tablespoon of Marsala too: delicious. I topped the pie with some good quality shop-bought puff pastry. The rest of the time we’ve been eating dals and rice, pasta with tomato-based sauces and vegetable curries.

This week I made a stew with some squash, sweet potato and chickpeas and that’s the recipe I’m going to give you in this post. It’s ridiculously easy to make* and can be adapted to whatever you have in your kitchen. It’s basically an Angela Hartnett recipe which was in her Sunday Telegraph column last weekend, the theme being one-pot meals. She used pumpkin but said it would work with any root vegetables and/or gourds. She accompanied it with toasted pitta bread; I served ours with rice.

*Angela instructs us to throw everything into the pot at the same time, even the onion, but the onion didn’t soften to my satisfaction (I had a feeling it wouldn’t) even though I cooked my stew for longer than the prescribed 30-35 minutes, so I’m suggesting softening the onion in a little olive oil before adding all the other ingredients.